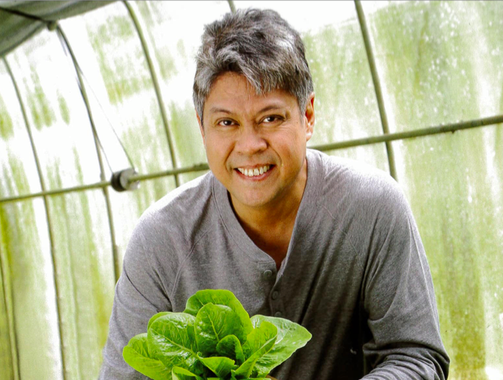 At the helm of the organic farm is Farmer Kiko, as Francis Pangilinan prefers to be called now that his two successive six-year terms at the Senate—marked by major upheavals such as the plunder trial of former President Joseph Estrada, the “Hello Garci” investigation of former President Gloria Macapagal-Arroyo and, most recently, the impeachment trial of former Chief Justice Renato Corona—has come to a peaceful close.

Pangilinan is certainly earning the right to the venerable title as he is spending more of the time that he never had during his days in the Senate at the three-hectare Sweet Spring Country Farm in Alfonso, Cavite, about two hours south of Makati City or 15 minutes away from Tagaytay City.

Only about 6,000 square meters have been developed so far, with one greenhouse and an open plot planted to highland vegetables such as lettuce, and herbs such as basil and tarragon. He is also proud of his tomatoes and coffee trees that have started to bear fruit.

Pangilinan, who went to Harvard University’s Kennedy School of Government, tells BusinessMonday that he will not miss the unbelievable stress that working at the Senate can sometimes cause. But then that does not mean he is now stress-free.

The law graduate of the University of the Philippines was heartbroken, for instance, when Typhoon Maring and the southwest monsoon unleashed their fury on the Philippines the week of Aug. 18 and destroyed about 100 kilos of lettuce, herbs and other vegetables less than two weeks before they were about to be harvested and sold.

“Heto ang bangungot ng magsasaka, nawasak ang tanim na kamatis … pagkatapos ng mahigit isang buwan na pagaalaga ng tanim na lettuce, ayun naubos sa walang tigil na ulan (This is the stuff of nightmare for farmers, the tomatoes are all ruined … after more than a month of taking care of the lettuce, all the produce were washed away because of the continuous downpour),” read two of his tweets during those days of heavy rainfall.

Farming can indeed be stressful, explains Pangilinan, who first harvested vegetables at the family farm in June 2012. But it is a different kind of stress, he says, and one that he is happy to take on. He adds that there is nothing like a bountiful harvest, eating your own vegetables and drinking your own coffee to make all the effort worthwhile.

Pangilinan says that the idea to build a career in farming was born in 2010, when he was given the gargantuan task of chairing the powerful Senate committee on agriculture and food. He was initially intimidated by the assignment considering that he had very little knowledge of the sector, and that a hefty 60 percent of Filipino workers directly and indirectly depend on agriculture for their livelihood.

As he says, he was a David facing an unknown Goliath.

But as he has always done throughout his 50 years, Pangilinan studied hard to accomplish the task, spurred on by what he did know about agriculture, which was that it was a sector badly needing help, especially farmers who toil long and hard to put food on Filipinos’ tables.
One of the biggest fruits of his labor at the committee on agriculture was the Sagip Saka program launched in January 2011. The advocacy aims “to achieve sustainable modern agriculture and food security by transforming agricultural communities to reach their full potential; improving farmers’ and fishers’ quality of life; and bridging gaps through public-private partnerships.”

Pangilinan says that his involvement in the Sagip Saka program brought him up close and personal with the farmers and fishermen. It developed in him a love for the land.

Thus from knowing next to nothing about farming, Pangilinan says that his work in the committee brought him deeper into agri-enterprise and the conclusion was to invest in his own farm.

“Before I knew it, I had become deeply immersed in farming, and it has become a true passion, advocacy and source of pride,” says Pangilinan, who likens growing vegetables to waiting for babies to born, and the joy from the harvest very much like the happiness from the birth of healthy babies.

Pangilinan, the fifth of nine children, also admits that his eating habits changed considerably since the farm came into being.
He says he was not much of a lettuce eater, being more partial to lowland vegetables such as squash and string beans. But because the family now grows its own vegetables, he developed a taste for healthy food, which is timely considering that he turned 50 on Aug. 24.

He says his eldest daughter KC is the real vegetarian in the family. He used to be content with the occasional pinakbet.
“But now I eat a lot of different kinds of lettuce at night,” says Pangilinan, who has also switched from instant coffee to brewed coffee since he now has his own coffee, branded as Sharon’s Choice beans sold in Echostore branches.

“Iba ang lasa ng sarili mong kape (It’s a pleasant change when you grow the beans of the coffee you brew),” says Pangilinan, who proudly brings home arugula and chili powder for KC.

For now, the rewards from his venture are mainly psychological, but Pangilinan is confident that the farm, which was started with a capital of about P500,000, will eventually turn in a significant profit, although he was able to earn his first P18,000 gain from his harvest in March of this year.

“I have learned that I have to sell about P100,000 worth of produce to be able to break even,” says Pangilinan, whose Sweet Spring Country farm products are often sold at the Robinsons Summit Ridge.

The damage from the recent typhoon will set his plans back, but Pangilinan is unfazed, charging the incident to experience. He says it is the tuition he has to pay to learn more about being a farmer.

“I have been reading a lot of books, and any book will tell you that ventures will really start turning profitable from the second to the fourth year. We are now on the second year of our five-year lease although there is also the option to eventually buy the land,” says Pangilinan.

Some people, however, can’t seem to believe that Pangilinan is really finished with politics, with which he has been involved since his days in UP where he was once chair of the Student Council. After all, the Liberal Party stalwart was heavily involved during the presidential run of Benigno S. Aquino III.

He says that he is savoring these moments away from the political limelight. But he adds that he does miss once in a while the stress and the high that comes from being at the forefront of the country’s political affairs.

He says he has been able to leave politics with his “soul intact,” although maybe “frayed around the edges” and with much more gray hair and deeper wrinkles. He explains that politics is not the end-all and be-all of his existence, and that whatever power and influence that comes with his position are fleeting.

“To be a decent public servant is something that I had to work on every day because it is so easy to lose sight of your goals, so easy to justify any possible wrongdoing,” says Pangilinan, “The pressure is always there from the beginning, but then I knew from the start that one can say ‘no.’”

From the time he started, he reminds himself constantly “that all this is fleeting,” says Pangilinan, who also counts on his children—KC, 28; Frankie, 12; Miel, 8; and Miguel, 3; and wife, megastar Sharon Cuneta—to keep him grounded.

As Cuneta, his wife of 17 years, said in her tweet: “I am not afraid to say that I am so proud of him because it is true, never siya namorsyento o kumita sa politika (He never took a percentage cut or earned during his days as a politician).”

Pangilinan remains involved in politics mainly through Kaya Natin, an advocacy group that seeks to provide a support group for “clean” politicians, of which he has been named chair.

And to the politicians under his wing, he shares the message that it is possible to stay on high moral ground and that, more importantly, there is life after politics—and a bountiful one at that.